2011
Have you heard about the American sitcom «Modern Family»? 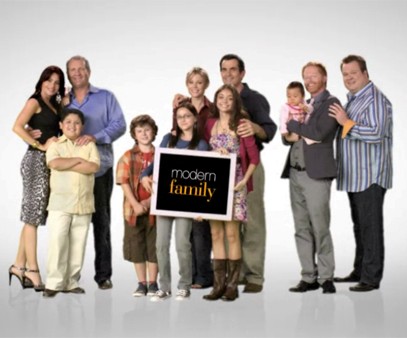 Last meeting of English Club was exciting and funny due to presentation and watching popular American series Modern Family.

As a result we`ve known a lot about the cast, plot and characters.

Modern Family is an American comedy television series remained popular since its premiere in the USA. In 2010, Modern Family was nominated with five Television Critics Association Awards. The show gained nominations for best new series, best comedy series and best program of the year.

The show was later also received a GLSEN Respect Award for its portrayal of «positive images and storylines that reflect a diverse America, including the depiction of a family headed by a gay couple.

The series, which was created by Christopher Lloyd and Steven Levitan, is produced by 20th Century Fox Television and largely presented in a mockumentary style.

Claire is a homemaker mom married to Phil Dunphy (Ty Burrell); they have three children. After splitting with his longtime wife, Jay has with a much younger Colombian woman, Gloria Pritchett (Sofía Vergara), and is helping her raise her son, Manny Delgado (Rico Rodriguez).

Mitchell and his partner Cameron Tucker (Eric Stonestreet) have adopted a Vietnamese baby, Lily Tucker Pritchett. Lloyd and Levitan developed the series while sharing stories of their own «modern families." They pitched the show to CBS, NBC, and ABC, which accepted it.